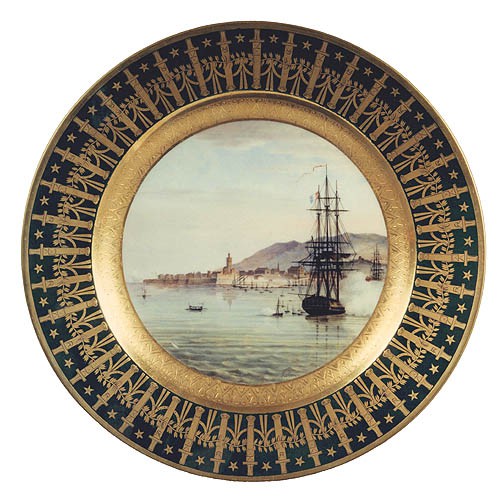 On Monday, September 4, 1820, the surveillance officer reports that Napoleon..: “was in the garden a Short time last evening. I saw him this morning in the Chinese Summer House which [He] is now building. I was returning from my Stable [he] looked at me with his glass and remained in the same place while I passed close under him.”
Of those long and gloomy winter days, Louis Marchand tells us: “A very beautiful Sèvres porcelain service had been brought from Paris for the use of the Emperor, each dozen was enclosed in leather-lined morocco cases, a magnificent cabaret of twenty-four cups and accessories also enclosed in a similar case, and two vases from the same manufacture. The Emperor only used them to make gifts. Each piece represented views of battlefields or large cities. Looking at them one day with the Count of Montholon, the Emperor stopped at one of them which represented the city of Ajaccio at the moment when the frigate the Muiron, with General Bonaparte on board, was anchoring in the port, on her arrival from Egypt: “Here, Montholon, this is my house,” he said to her, “I am sure that this boat, next to the frigate, is that of my nurse; the poor woman was one of the first to come to see me. The town was under the influence of a few leaders who were quite disconcerted by my arrival, there was disagreement, the municipality blamed the parliament, the magistrates, but everyone wanted to see the famous Napoleon again. The whole population lined the shore, the garrison, in a spontaneous movement, had taken up arms and formed the hedge to my house.”
Napoleon
2021 Napoleon Year