On 10 December 1815, the emperor left The Briars – where he had experienced a few happy weeks – to move into Longwood, where he would endure the hardships of isolation, the weather and surveillance.

In accepting the choice of the Longwood residence, Napoleon never anticipated the violent winds that swept the plateau part of the year, torrential rains or fog. In addition, there was a shortage of water, and humidity ate away at fabrics and paper, and spoilt leather and clothing. Longwood’s only advantage was that the plateau was an ideal location for the troops to set up camp for their surveillance duties.

Napoleon languished in exile at the end of the earth, in the middle of the South Atlantic.

Longwood House is known internationally as the house where Napoleon, Emperor of the French, died on 5 May 1821. Its current appearance is closest to the house’s conservation condition on this precise date. 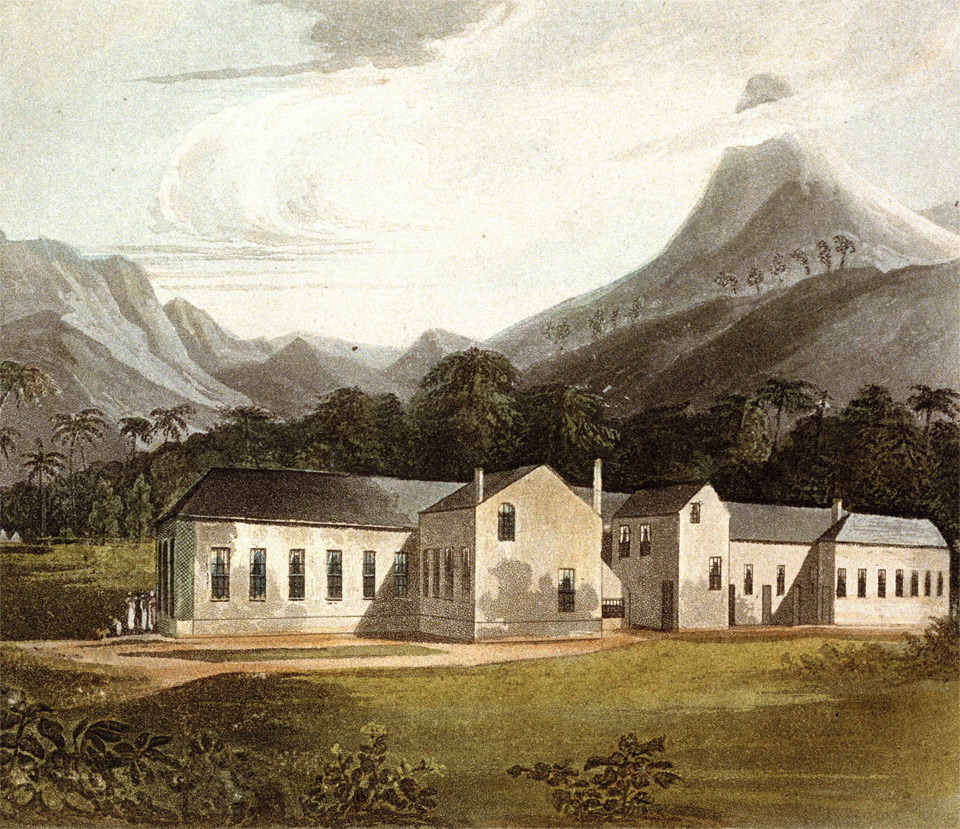 The only items there to remind Napoleon of the splendour of the Empire were the porcelain tableware and the silverware.

The installation of Napoleon and his retinue required numerous repairs and additions to the existing buildings. The result was what we see today: an assemblage of disparate buildings that is more reminiscent of a camp than a residence. For much of his time there, Napoleon also had the inconvenience of having to put up with the noise and comings and goings of workers and various command staff. It was in this miserable setting that Napoleon lived out his final years. Five and a half years struggling with the humiliations the British administration subjected him to; five and a half years retreating into his memories, sharing his daily life with barely a dozen people, never being able to find true rest, sighing, playing out the final act of his life, being watched right down to the most insignificant actions of a life never surrendered, never giving in to resignation. He died a martyr, ‘murdered by the English oligarchy and their hired assassin’.

The precious items the Emperor had taken with him to the island have all been brought back to Europe by his various companions in exile. Today, these items are all part of national or private collections.

View of Longwood by Marchand

‘When I am gone, English travellers will sketch this garden created by Napoleon. They will all want to visit it.’

Napoleon was proud of the gardens at Longwood House that he designed. He acquired a garden maintained by the British Skeltons and which included a rose garden. Encouraged by his doctors who wanted him to get some exercise, Napoleon only really began to take care of the gardens in 1819 and did so up until late 1820. Today the garden comprises a Chinese pavilion, grotto, gardening shed and gardens structured by sunken pathways outlining parterres of tropical flowers and numerous plants endemic to the island.

View of Longwood House from the flower garden 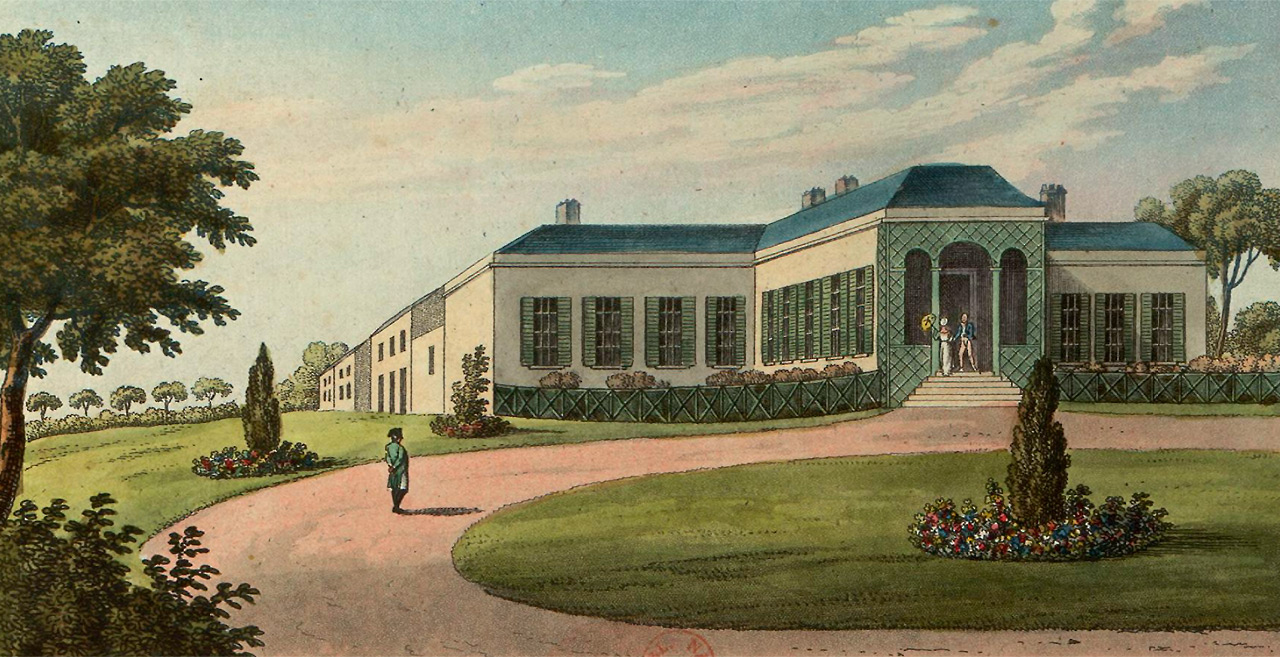 Napoleon ‘took advantage’ of his exile on St Helena to complete his undertaking to write his memoirs. On learning the news of his exile on the island, he asked Las Cases: ‘What can we do in that desolate place?’. To which came the reply: ‘Sire, we will live on the past; there is enough in it to satisfy us. Do we not enjoy the life of Caesar and that of Alexander?’

‘We shall possess still more; you will reperuse yourself, sire!’. And Europe’s captive agreed: ‘Be it so! We will write our memoirs. Yes, we must be employed; for occupation is the scythe of time. After all, a man ought to fulfil his destinies; this is my grand doctrine. Let mine also be accomplished!’. 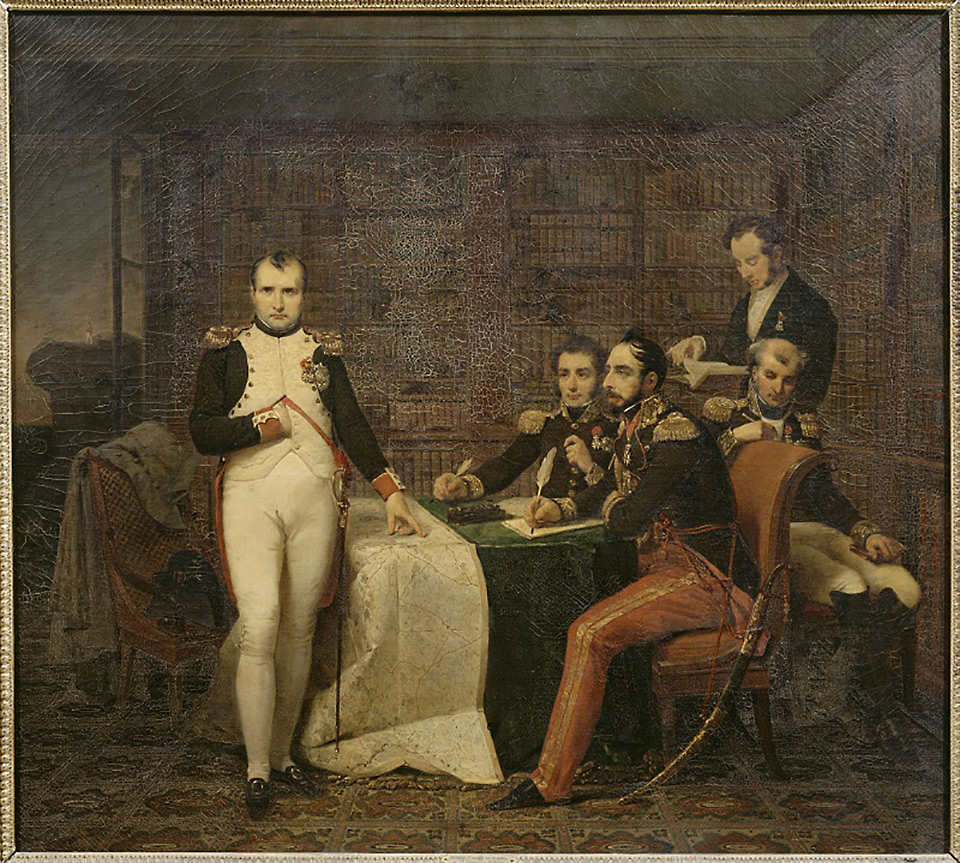 Napoleon I dictating his memoirs

‘History is a set of lies agreed upon.’

On 4 August 1815, accompanied by three generals, a secretary and a few servants, he took his place aboard the Northumberland, which set sail towards the prison at the end of the earth. He landed there on 17 October 1815. Several weeks earlier, he had begun to dictate. This writing of history was only possible with the help of his companions in exile. After some hesitation, he selected generals Bertrand, Montholon and Gourgaud, then adding the councillor of state Las Cases, to whom he dictated sometimes in his bedroom – hardly ever in his small study with no fireplace – but mostly in the billiards room.

These memoirs are Napoleon’s own account, the end product of St Helena’s writing of history. They feature a well-defined structure – uniformly divided into chapters with subsections – and the rich, dense content is presented in a simple style, precisely and without witticisms, and is organised in chronological order. Positioning himself as a historian (who is never a neutral observer in any case), Napoleon wrote in the third person, referring to himself as ‘Bonaparte’, Napoleon’ or ‘the Emperor’. He skilfully blended detailed historic and documentary information – explanations that can sometimes turn out to be tedious (without losing the reader’s interest) – with justification for his choices and conduct.

The island of St Helena the Longwood residence are famous because Napoleon lived out his final moments and died there. Napoleon’s death may have highlighted the health problems he had been suffering from throughout his exile on St Helena, but he had actually been troubled by pathological disorders of varying degrees of severity his whole life – including obesity, fever, scabies and abdominal problems. In the first days of May 1821, a case of persistent hiccups exhausted an already ill Napoleon. Worried, the doctor Arnott enlisted the assistance of the doctors Shortt – director of the island’s healthcare services – and Mitchell, a navy surgeon. In the afternoon of the 3rd, Father Vignali spoke to the emperor and administered the last rites. To overcome the patient’s constipation, and despite the opposition of Antommarchi, the three British doctors decided to administer a massive dose of calomel (mercurous chloride). The medication caused a shock that considerably weakened the patient, and he fell into a comatose state. The death throes began during the night of the 4th-5th and ended on Saturday the 5th at 5:49 p.m. in the presence of all his companions, officers, priest, doctor and servants, just as the scene has been immortalised by Steuben’s famous painting. At midnight, the servants cleansed the body.

‘The death of Napoleon’, print 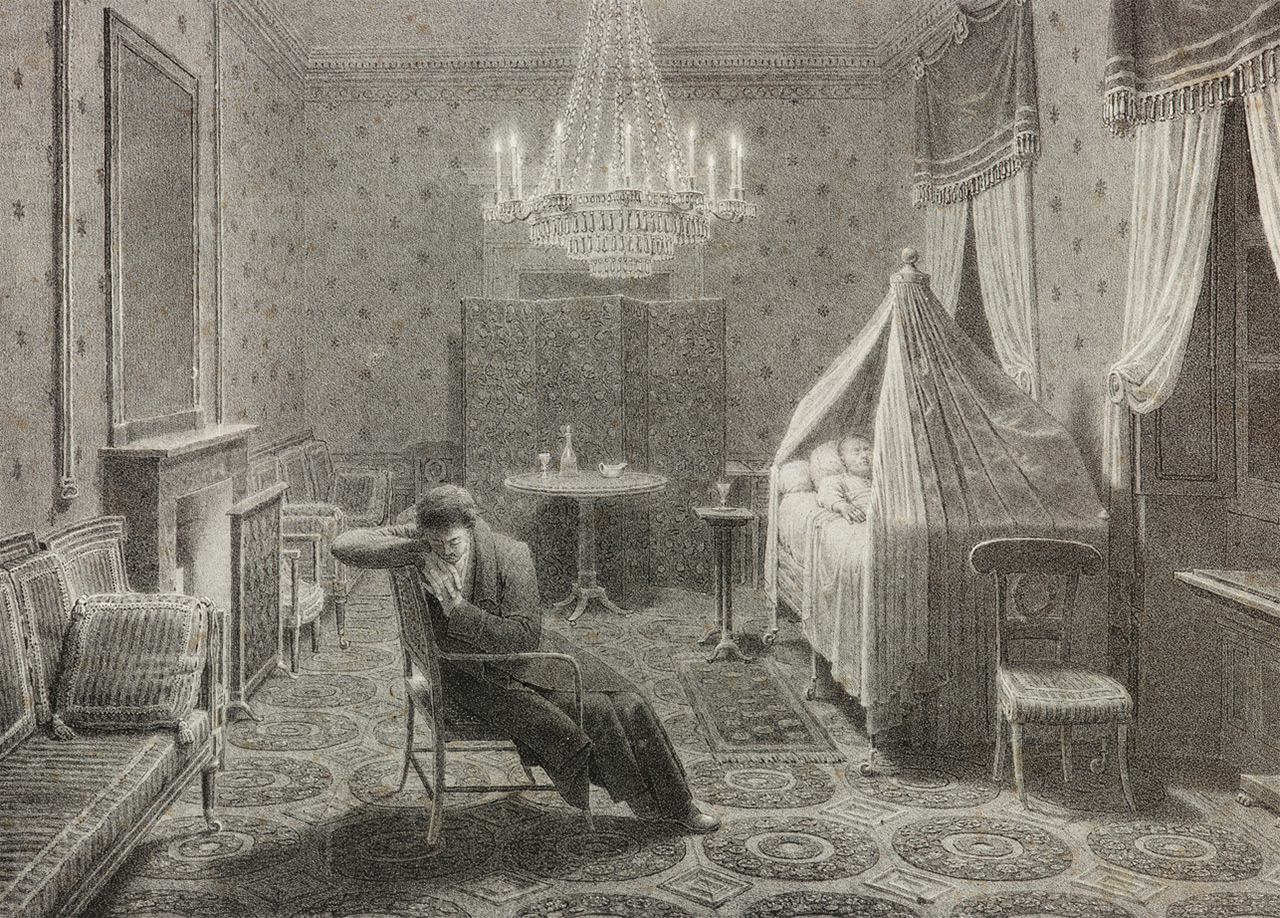 ‘I die prematurely, murdered by the English oligarchy and their hired assassin; the English people will not delay in avenging me.’

From 11 April, Napoleon locked himself away for long hours in the company of General Montholon and wrote his will. The main document was recopied and signed on 15 April. Up until the 27th, he had been writing or dictating a series of codicils (documents added to a will to modify it) in his moments of lucidity. He agreed to see Antommarchi again and instructed him to perform an autopsy on his body. On the 29th, signs of mental confusion began to appear.

Written between the 16th and 24th April 1821, the original will is now held in the French national archives. It contains the famous phrases: – ‘I die in the apostolic, Roman Catholic religion into which I was born over fifty years ago.’ – ‘I wish for my remains to repose on the banks of the Seine, amidst the French people I loved so well.’

The Emperor did not forget his companions in captivity. Montholon received 2.25 million francs; Bertrand and Marchand were to receive 950,000 and 500,000 francs respectively. To his last servants (Saint-Denis, Pierron, Archambault, Vignali, Coursot, Chandelier and Santini), he bequeathed between 25,000 and 100,000 francs. General Las Cases received a bequest of around 300,000 francs. Only Gourgaud did not appear on the list.

‘The death of Napoleon’, painting by Charles Steuben 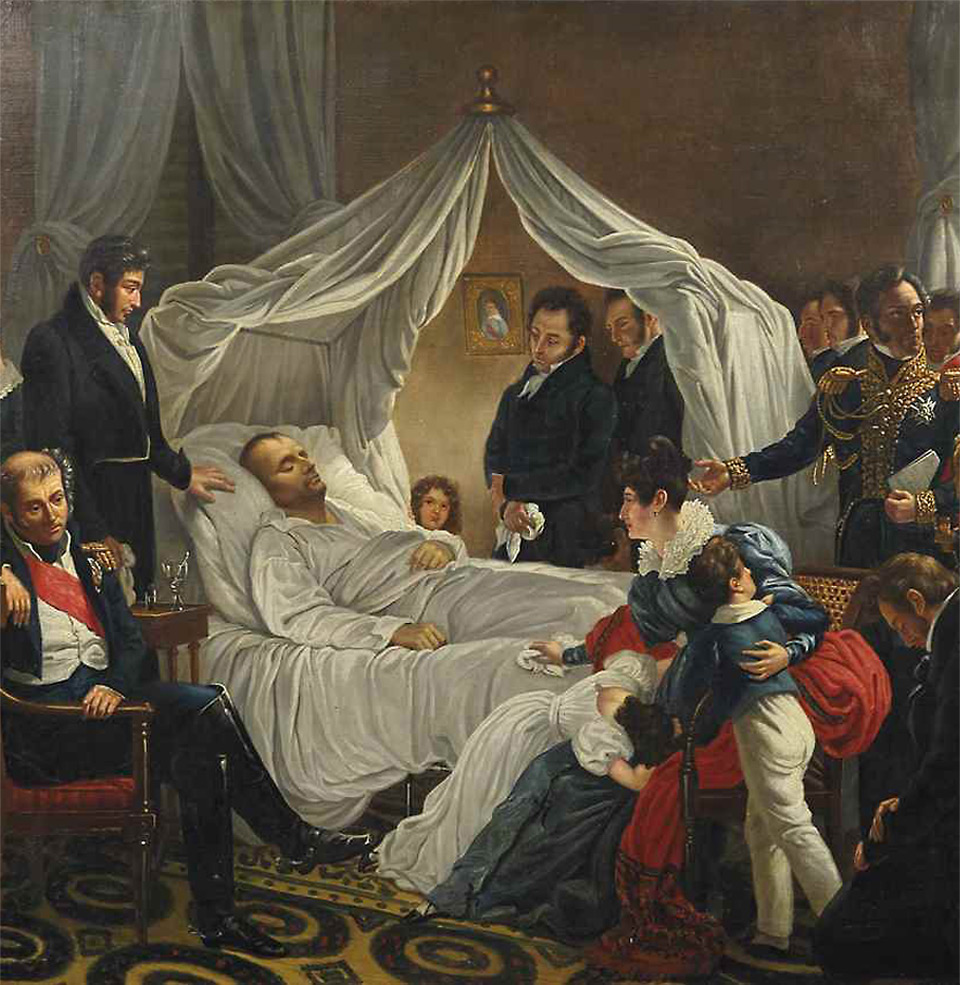 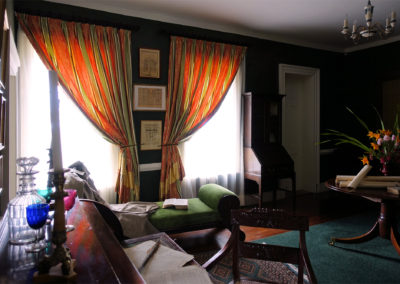 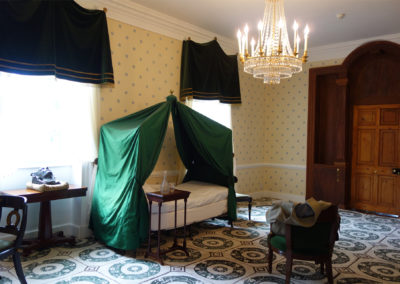 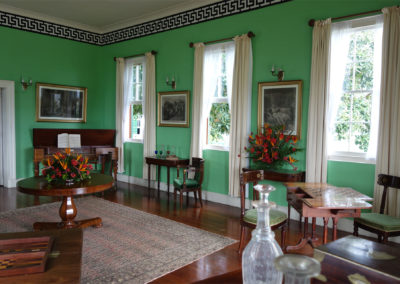 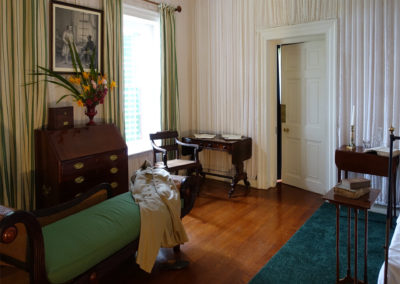 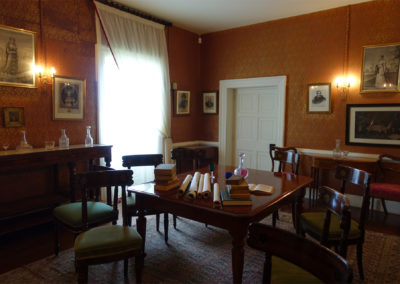 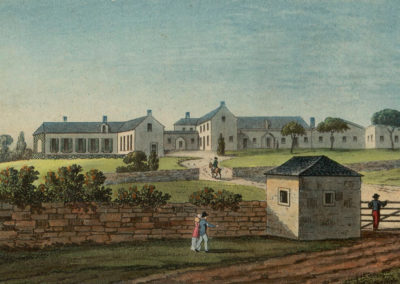 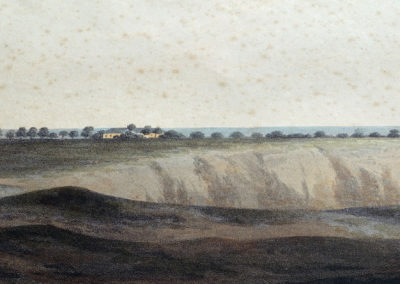 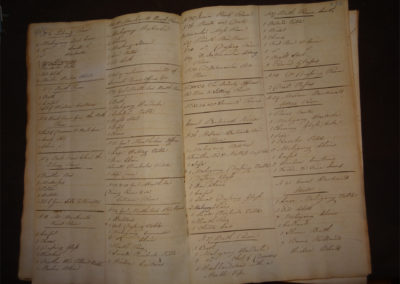 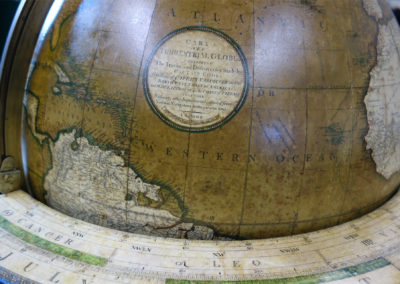